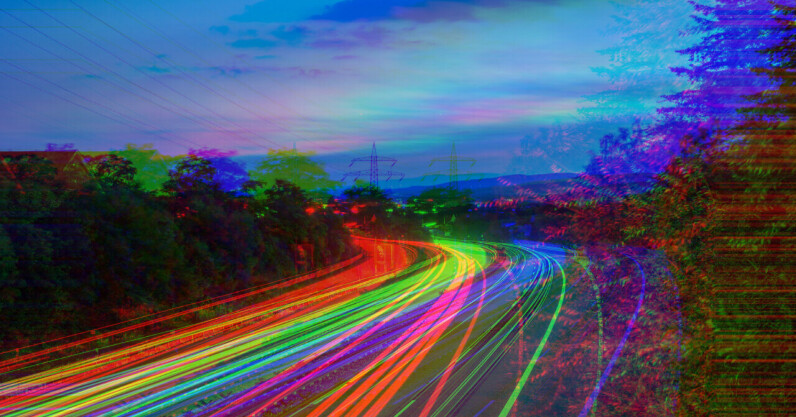 The future is becoming less car-centric. But in Germany, the autobahn runs a whopping 13,000 kilometers. It’s not only one of the longest and most dense road systems globally but a love letter to taking cars to the limit featuring stretches with effectively no speed limit for certain classes of vehicles.

But it also provides a critical test bed for the future of mobility, featuring a plethora of rapidly evolving technology in the wild. Let’s take a look.
Driving with your hands off the wheel and your eyes off the road
In December 2021, the German Federal Motor Transport Authority (KBA) granted Mercedes-Benz system approval for Level 3 autonomous driving under UN-R157 on the autobahn.
The Mercedes-Benz EQS sedanHi there, EV nerd!

Subscribe now for a weekly recap of our favorite mobility stories

It means drivers can legally engage in “certain secondary activities at speeds of up to 60 kmph in heavy traffic or congested situations on suitable stretches of motorway” such as the autobahn. These include talking to colleagues via In-Car Office, surfing the internet, or watching films — otherwise blocked applications while driving. The apps are available through Mercedes Benz DRIVE PILOT in the S-Class and EQS, at an additional cost of €5,000 and €7,430, respectively.

Specifically, it’s Level 3 automation (there are 5 SAE levels) ​​, meaning the driver must stay behind the wheel and alert. You can go hands-free, take your eyes off the road to watch a movie, and turn your head to the side. But you can’t take a nap.

However, drivers are only permitted to use these features at speeds of 60 kmph in heavy traffic or congested situations. Considering the autobahn speed is 130 kmph, this is akin to checking your phone during a traffic jam, so there’s work to be done.

The technology is currently exclusive to Germany. But Mercedes aims to get regulatory approval in California and Nevada later this year.

Since 2019, Germany has trialed power lines for electric trucks on three patches of the autobahn. This enables select trucks to recharge their batteries while driving at full speed.

Similar to tram or train tracks, the trucks drive on the highway using overhead electricity from a pantograph. They switch to battery power for the final miles. This slashes energy consumption by half and substantially reduces local air pollution.

However, the initiative costs a whooping €72.8 million to develop infrastructure, operate test tracks, and accompanying research. It’s not cheap, raising questions about the financial viability of the initiative compared to conventional battery charging at truck depots.
City Transformer
The City Transformer: the world’s first all-electric foldable urban vehicle At first look at the electric-powered City Transformer, it’s not unlike other Category L vehicles such as autocycles and the Arcimoto.

The vehicle is size-efficient and has a range of around 180 kilometers on a single charge. But it’s also the world’s first foldable electric car making it suitable for short-city driving as well as the autobahn.

The vehicle is built to withstand a range of driving and parking conditions. Two steel beams on the vehicle frame can extend the wheel track by 25 centimeters on each side at the push of a button. This increases stability for driving fast, helping with better weight distribution, such as when turning corners.

It also makes it suitable to drive on the autobahn, although to date, it can only reach 90km per hour. The foldable chassis also creates width adjustment meaning four City Transformers can park in one standard parking space.

The company is from Israel, and Roding Mobility in Germany built the prototypes.

City Transformer was awarded Top Tech Startup at SHIFT Mobility at IFA, Berlin, last week. Udi Meridor, Co-Founder, COO & Strategy, told me the company is planning test drives later this year with the goal of mass production in 2024.
An actual industry use for 5G

Imagine driving on the autobahn. Your GPS can tell you when to change lanes or adjust speed. This results in a smoother journey with reduced traffic jams and accidents. In Germany, a consortium called Providentia ++ is doing just this. Collaborators include the Technical University Munich, Intel, Valeo (automotive supplier), Fortis (Bavarian R&D institute for software-intensive systems), Elektrobit (expert for automotive software systems), and Cognition Factory (digital twin solutions), as well as associated partners such as 3D Mapping Solutions GmbH, Siemens Mobility, and Huawei.

Providentia focuses on a 3.5km A9 Digital Motorway Testbed, a dedicated space close to the autobahn. Snsors collect real-time data. This is fed into a digital twin. It simulates the ongoing traffic flow, detecting potential problems, and providing warnings and advice to drivers via a powerful 5G connection. In the future, a corresponding app will provide drivers with a comprehensive real-time picture of the surrounding traffic environment.
Slow down the autobahn
However, despite the autobahn’s relationship with innovation in the above use cases, the most radical idea on the autobahn might be the most simple, in light of the current oil crisis – a speed limit.

And there’s precedent – during the 1973 oil crisis, Germany imposed a temporary speed limit on the autobahn.

The Deutsche Umwelthilfe (Environmental Aid Association) calls for speed limits of 100 kmph on motorways and 80 kmph outside of town to reduce 9 million tons of CO2 and 3.7 billion liters of fuel.

But an agreement of no general speed limits on autobahns was decided upon by the three-party coalition this year.

Unfortunately, there’s also limited national support, with a recent poll commissioned by the magazine Der Spiegel finding that only 55% of Germans support an immediate, temporary speed limit, and 39% are against it.

The autobahn is a critical testbed for advancing tech mobility. But it also represents a country unwilling to sacrifice the right to drive fast for the greater good. So it looks like Germany will need to suffer more from oil shortages in the coming months to result in any real change.