There was only one reason to wake up at 5am today, and that was to fire up Steam and let it unpack The Callisto Protocol’s pre-load files. This was the day I had been looking forward to for most of the year, having watched and read every ounce of press release from Striking Distance Studios leading up to this point.

Hell, I even listened to the Helix Station official podcast series which dramatises the events leading up to Jacob’s entry into the prison on Callisto where the adventure begins.

We should have spotted the red flags early on, Striking Distance remained very silent about the PC version. Typically with AAA titles we catch some word on technologies being used and enhancements for PC gamers, but nothing much for this one.

Then the PC system requirements got shared, only showing minimum and recommended and promising Max and Ultra at a later date. 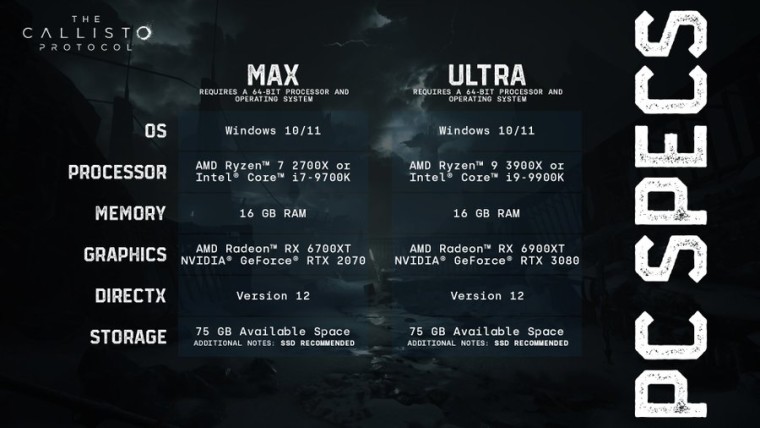 What confused many was the lack of clarity in any of these requirements, no mention of framerate target or resolution. Without these two key metrics the specs were largely meaningless, but it was something at least.

Fast forward to now, I am sat here wondering where things went astray. I have played just over 100 minutes of the game and have requested a Steam refund before the two hours threshold was reached.

The game on the whole looks fantastic, a next gen experience for sure, especially with ray traced reflections enabled as it adds some extra depth to shiny surfaces and floors, bouncing light sources perfectly. The only other ray tracing option is related to shadows, and this has less of a visual impact.

For reference, my specs are:

Disabling all ray tracing options resulted in over 100fps average, but you lose the visual fidelity and depth of reflections as a result, so I opted for ray traced reflections set to medium, and ray traced shadows to off for the best compromise. All other settings remained in their Ultra/custom settings. This resulted in a framerate ranging from 55-85 depending on the level of action going on and particle effects from fire/debris.

The combat itself is initially quite cool, and dare I say it, fun… But that fairly quickly becomes repetitive, and when multiple biophages are coming at you, using the dodge moves often results in dodging the wrong enemy, or an inaccurate critical shot when the indicator pops up.

None of this really matters ultimately, because every time you enter a new area of the level, even if it’s a small room, or do a quick movement to evade or attack an enemy, you are 90% likely to get stuttering for a quick moment or two, and this is where the problem lies. Unreal Engine 4 is well known for its shader compilation stuttering, there are discussions all over the web about it, and a good starting point to read more about it is over on reddit.

On top of that, the game has only one proper upscaler, FSR 2.0, AMD’s platform agnostic DLSS equivalent. I tried to use it, running benchmarks and gameplay tests but saw no performance increase with it enabled, even in Performance mode. This needs to be addressed in a patch along with the stuttering which is shader compilation related. Digital Foundry has a new video out highlighting the issue specifically, viewable here (time linked).

The remaining upscaler option is an in-house Temporal method. As The Callisto Protocol is an AMD sponsored game, it is unlikely to ever feature DLSS, neither will Nvidia likely release a Game Ready driver for it due to this.

Diving over to Steam we can also see that there are currently over 4000 user reviews and most of them are negative. Multiple reviews published as of this morning are critical of the performance and lackluster gameplay, too.

My view is that at £50 we PC gamers expect a polished game befitting of all the hype and build-up that we have been given in the last few months. It is not too much to ask. As it stands, it feels like we have been left as an afterthought.

To pay this much and find out that the gameplay is weak, linear and filled with endless jump scares, many of which are repeating themselves, and to top it all off, the performance issues and broken features just leave a bad taste in the mouth.

This currently is a £25 game maximum, and if nothing changes with patches, then it is bargain bin material.