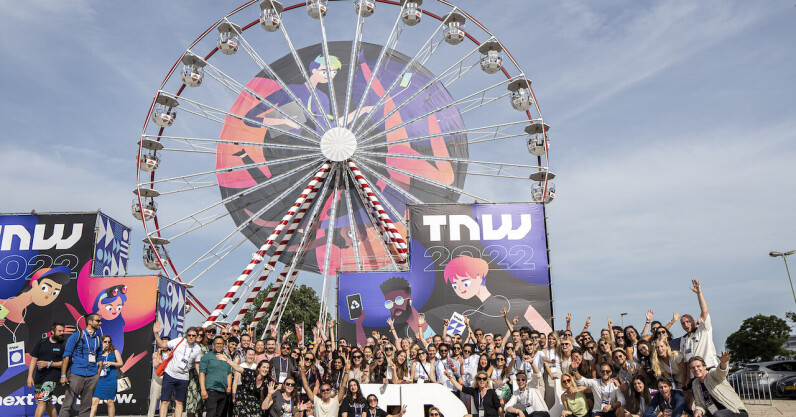 “Technology is a bridge between us all. Together we are European tech, united.” These were TNW CEO Myrthe van der Erve’s words during the opening ceremony of TNW Conference 2022. “Tech is evolving,” she says. “To stay ahead, we need to discover the next in tech, now.”

Those words are more than idealism, and carry real urgency. We seem to be hopping from health to political to economic crisis. And there was a distinct feeling from attendees at TNW Conference that we need to anticipate change wherever possible, instead of the reactive position in which we currently find ourselves.

What better place to discover the future of tech than the startup hub that is Amsterdam? The city boasts a vibrant startup ecosystem, a hyperconnected infrastructure, and a constant influx of top tech talent. But it’s also a dot on a fragmented continent: the European Union alone has 24 recognized languages amongst its 27 member countries.
Psst…

While we see technology as a unifying force, a unifying message needs a bit more than code.
Local still trumps global
While a Californian is different from a New Yorker, they still speak the same language (thereabouts). Perhaps that’s the reason some US businesses looking to enter the European market tend to view it as a single market to conquer.

I face these challenges daily as I help organizations navigate this fragmented world. That’s why I loved Happiest Baby CMO Lexi Busch’s comment during TNW conference: to be a good communicator, you have to play cultural anthropologist.

Communicating across borders and cultures goes beyond language. You could have an AI translate something into German, only to find that the city you’re marketing to has its own slang and sensibilities. Your message might be on brand, but it would still be foreign.

Or take the French, who Lexi says have a highly attuned radar for everything that isn’t French. One look at the images in a campaign and they knew they weren’t taken in France — hint to future marketers, the wall sockets were different!

Scaling internationally and at pace is a massive challenge in and of itself. Lior Ashkenazi from Globalization Partners mentioned during a panel: “typically, companies that want to expand internationally assume they can do it themselves without support.” In her experience, this leads to regulatory nightmares.

This is fundamentally true for comms too. You need boots on the ground, who not only know the brand, but the audience you’re trying to connect with. You need people who produce puns that pierce through the marketing noise, creative campaigns with local relevance, strategic comms advisors who can help educate key market stakeholders on policy.
Technology creates barriers — and provides solutions
But what about the web — that unifying force that breaks through borders? Access to information aside, it has had something of a cultural imperialist influence. The basic mode of communication is English; outside that language, the amount and quality of information dwindles. And let’s not forget the online silos and echo chambers that social media has created.

TNW Conference left me optimistic about the future and how emerging technologies can break down these barriers. If you want a glimpse of the future of communication, view the metaverse through Meta CDO, Maxine Williams’ eyes: “you put on a pair of glasses in a restaurant and AR translation tools let you read the menu in your language. That’s the real-time removal of barriers, allowing you to be present and comfortable in a space with access to new opportunities to communicate.”

Or look at how the artist Tamara Shogaolu uses VR, AR, and other emerging technologies across multiple platforms to tell stories in brand-new, immersive ways. Take her interactive documentary, Un(re)solved, that uses voice recognition to make the voices of disenfranchised people heard.

To communicate, we need to be near others and understand our shared world view, cultural nuances and all. Whether that’s telling stories around a campfire or using digital technologies to transport our voices halfway across the world. And while we’re great at creating borders, silos, and echo chambers, we’re equally capable of removing them!

The TNW Conference highlighted the cracks beginning to widen in these borders that have separated us. And that makes me incredibly excited about the future.