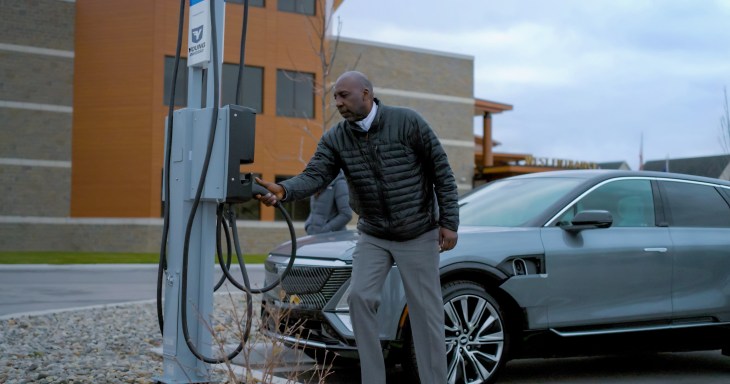 As electric vehicles begin to take some market share, the nation’s charging infrastructure is playing catch-up.

Some folks already have an edge in this race, including some California residents and Tesla fans, but many EV owners in America still face charging deserts and unreliable stations — two key obstacles to decarbonizing transportation and doing right by our neighbors.

The Department of Energy says there are now around 50,000 charging stations in the U.S., and the Biden administration wants to see 10 times as many operating by 2030. Though it’s not clear how the country will reach that milestone, several automakers are turning to dealerships to help fund thousands of additional public charging stations across the U.S. in rural and urban areas. Their plan starkly contrasts the no-dealer strategy embraced by Tesla, Rivian and the like.

GM said last year that it would install as many as 40,000 level 2 chargers in communities across the U.S. and Canada. On Wednesday, the company offered an update: Canadian EV charging company Flo will provide those chargers, with each one maxing out at 19.2 kilowatts. GM told TechCrunch that it will cover the cost of the chargers and shipping, while dealerships will pay for things like cable management, maintenance and warranties.

Crucially, these chargers won’t be located at dealerships. Instead, GM said dealers will pick nearby sites to host the co-branded stations. The company offered examples like “entertainment venues, schools and other popular destinations.” Hosts will have to agree to cover some costs too, including permitting, installation and energy bills. GM added that hosts can choose whether they want to bill drivers for charging or offer it for free.

The program is off to a slow start, with stations so far installed at “several locations” in Marshfield, Wisconsin and Owosso, Michigan. Next up is Delaware, Georgia, Illinois, Indiana, Kansas, Ohio and Washington state, GM said, adding that dealers there will “install their first chargers in the weeks and months ahead.” Dealers in the program are allocated 10 apiece, and less than a thousand dealerships in total have signed up for the program so far, “representing almost a quarter of all GM dealers in North America,” per GM.

A separate company, Blink, is installing public chargers onsite at GM dealerships. That part of the equation more closely mirrors what other automakers are up to in the United States.

GM isn’t the only legacy automaker turning to dealerships.

Ford said earlier this week that 1,920 dealers signed on to its EV sales program, which will see most of those locations outfitted with two chargers each. Stellantis also plans to require dealers to install chargers onsite, and buy new gear for EV repairs, if they “want to continue to offer our electric vehicles into the future,” a spokesperson for the company recently said.